During the first stage (2010-2013) of HSE’s transformation, the university established 10 international laboratories lead by prominent foreign experts. The development of laboratories in the economic, social, computer, and mathematical sciences has helped to reduce Russia’s long-term isolation in these areas, while also enabling HSE to be part of the global network-based research market, as well as strengthen the university’s position as a centre of advanced research in select areas of expertise. Since the university is concentrating its resources on the development of these areas, the number of research publications in the international databases Web of Science and Scopus has grown five times over the last five years. Globally renowned scientists such as Nobel Laureate Eric Maskin and Fields Medal Winner Andrei Okounkov have also joined HSE. In addition, the number of international laboratories at HSE grew to 22 in 2015. These research centres have enabled the university to integrate a new academic culture with more traditional forms through the creation of faculties before moving further to the next stage of transformation.

The second stage (2014-2015) in the transformation of the university’s organizational model was the transition from highly specialized faculties and academic departments, developed for the primary purpose of teaching, to a model characterized by mega-faculties, or large research and education units engaged in research (including multidisciplinary research) and faculty training in broad areas (e.g., economic sciences, social sciences, business and management, humanities, computer and engineering sciences, mathematics, law, communications, design and urban studies). This integration was completed in 2015 when 21 faculties and division networks were replaced with 10 mega-faculties. The former faculties and academic departments became departments and schools, while the mega-faculties were merged with previously independent HSE research units in order to conduct basic and applied research, as well as focus on expert analytical work and consulting. The operating mechanisms of the new organizational model are being finalized.

The university’s merger of interrelated fields of expertise encourages the development of promising areas of research in science, thus ensuring cross-disciplinary interaction in research and teaching. This shall also contribute to the rapid development of the mega-faculties’ educational programmes built into the framework of new fast-growing areas of expertise being implemented by scientists, key employers and international experts. Students will also become involved in real research projects during their education. Such integration will be carried out by research units, departments and schools within mega-faculties.

This conversion ensures an integrated approach to mega-faculties-based management and the development of all areas of the university’s expertise, including higher education and continuing education, basic and applied research, innovation, expert analytical work and consulting. HSE’s international laboratories still act as the drivers of research, set standards for other research teams, and play an imperative role in graduate and postgraduate education. Regular evaluation of the laboratories’ performance by internationally recognized experts helps give grounds to decisions regarding their future operations. Furthermore, mega-faculty management is based on the principle of academic self-governance, which is implemented at all stages of decision-making.

In 2015, the right to independently manage financial resources and the responsibility for achieving planned targets (e.g., KPIs for the deans of mega-faculties were set) were delegated to the mega-faculties. This significantly simplified the decision-making process, as well as allowed for more specific considerations of individual disciplines, thereby enhancing their development. At present, almost 50% of the resources from the university-wide academic development fund (e.g., scholarships for academic mobility of faculty members, researchers and students, conferences, etc.,) are managed by the mega-faculties. In addition, the mega-faculties’ academic development funds are competitively distributed in accordance with the decisions of their governing bodies, which are composed of researchers and instructors. In future, the mega-faculties’ academic and financial autonomy will be further increased. For instance, resources will be managed and decisions shall be made based on KPIs.

The university is currently in the third stage (2016-2020) of its transformation. HSE is continuing to improve its mega-faculties and establishing better conditions for their development through individual research and education units under new interdisciplinary centres of excellence. In particular, these centres use the mega-faculties’ infrastructure, human and other resources, thus becoming growth points for promising areas where the university intends to enter the global market. In particular, successes have been achieved in certain subject areas as evidenced by the high quality of publications in leading academic journals.

The mega-faculties and research units (including international laboratories) form the basis for the establishment of large units of expertise with interdisciplinary connections: Strategic Academic Units (STRA-Us). There are two types of STRA-Us – interdisciplinary consortia and centres of excellence, which are currently being formed based on the following criteria:

1.      Research must be consistent with the global research agenda and international research networks;

2.      Research must be relevant to Russia’s national interests and/or sectoral priorities;

3.      Individual STRA-Us must serve as expert analytical centres for the development of public policy in the economic and social sectors, education, science and technology forecasting and state-building; each unit should make a significant contribution to the development of the Russian economy; 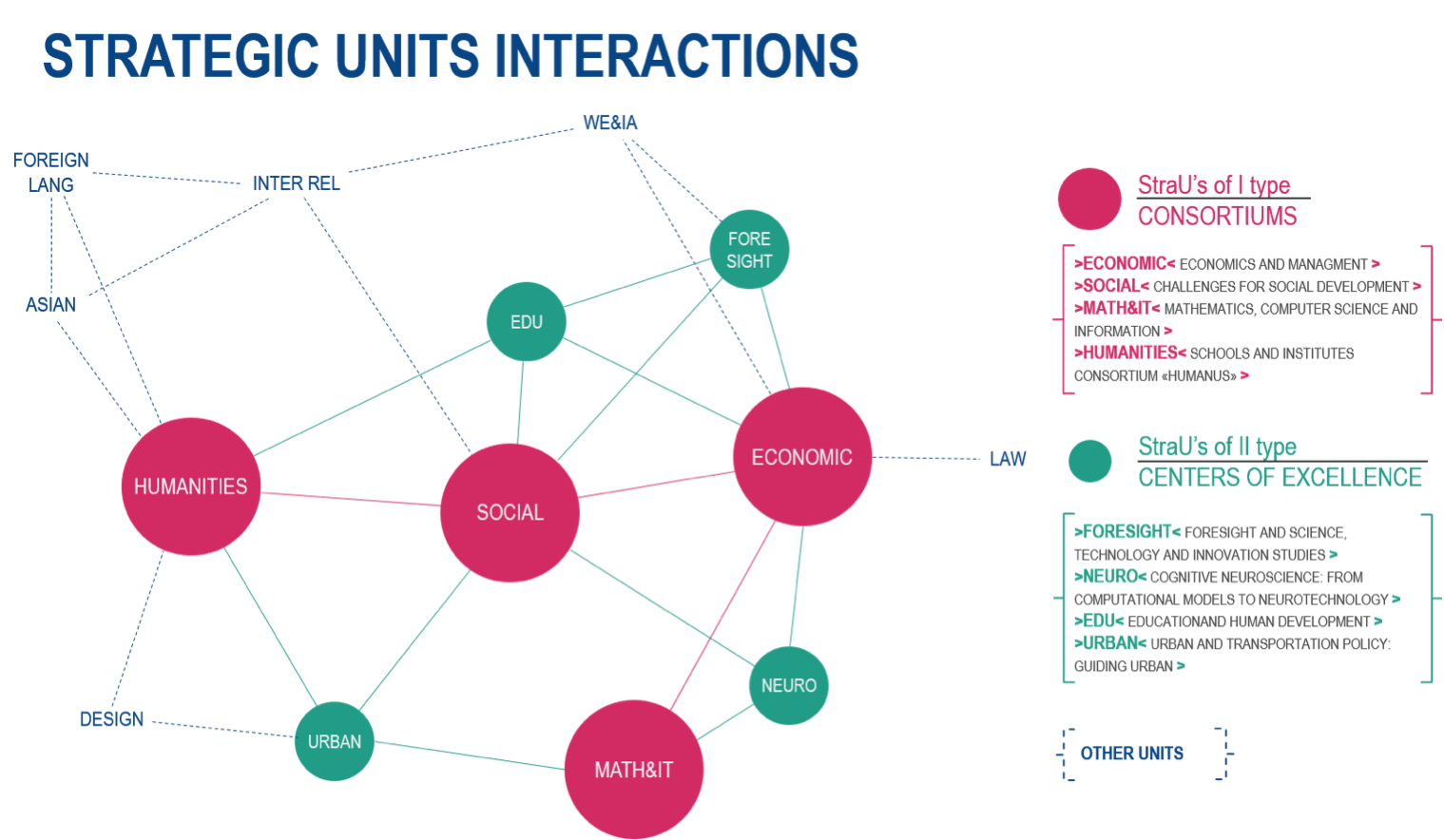 The first type of STRA-Us includes major consortia that address the university’s existing core areas. They are recognized internationally (reflected in their international rankings), and have a high capacity for further dynamic development. These consortia are formed from one or more mega-faculties and academic units of the university, which implement educational programs at all levels and their research has been integrated or is capable of being integrated into the global research agenda.
The second type of STRA-Us includes centers of excellence: individual structural units that have been created as new growth points in relatively narrow and promising interdisciplinary areas of research and education and are integrated into the global research agenda and implement Master’s and doctoral educational programs.

The first type of STRA-U includes major consortia, which engage in activities related to the university’s existing core areas. They are recognized internationally (which is reflected in their international rankings), as well as possess a high capacity for further dynamic development. These consortia are formed from one or more mega-faculties and academic units, which carry out educational programmes at all levels. Furthermore, their research efforts have been integrated or are capable of being integrated with the global research agenda.

The second type of STRA-U includes centers of excellence: individual structural units that have been created as new growth points in relatively narrow and promising interdisciplinary areas of research and education. They are integrated with the global research agenda and implement Master’s and doctoral programmes.

Each STRA-U is led by:

Each STRA-U is managed by a management committee, which makes programmatic and resource decisions with respect to each of the units’ tasks. Furthermore, it ensures the delivery of each of these tasks.

The university’s management practices have been tested within the mega-faculties model and have proved to be viable and effective. They will also be used in the next stage of the university’s development within the framework of the STRA-Us.